I received a very exciting delivery this morning. 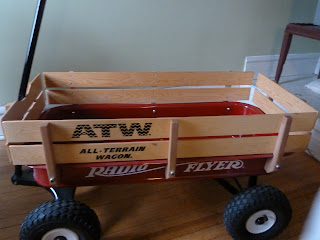 Yip, I've been scouring craigslist for a while trying to snag a second-hand Radio Flyer Wagon. I finally managed to find one at a decent price within the city limits (ie accessible via public transport as I don't drive) and, luckily, with a seller who was willing to deliver. No, I don't have some secret toddlers stashed away somewhere, this is destined for Bilbo use of course! 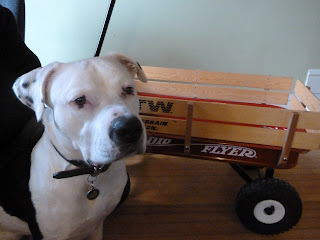 Though I have still to buy a harness and DIY a set of traces, I'm hoping that within a couple of months, Bilbo will be a cart-dog! He responds well to having a job to do and he's a strong boy with oodles of energy so he's going to help with the shopping.

"Weight-pull" is a fairly popular choice for ABD owners looking to work or compete with their dogs and there are some pretty extreme records out there, with dogs around Billy's size pulling 3500lbs or more! I find some of the videos a little intimidating as those dogs have serious loads strapped to them, though the waggy tail and bountiful praise makes me squirm a little less at this one:


However, my goals are much more modest and I don't think Me and Bill will have a problem working up to pulling a 35lb Radio Flyer. Then we'll see about adding a little more weight in (ie. picking up dogfood from Soggy Paws) as we go along. Bill is due for his annual vet visit early next month so he'll be having a full physical before we get started.

On the flipside of his excitability ("ooo is someone coming through the door, is that a dog across the street, hey have you got food, SQUIRRELLLL, did you hear that phone ringing, PEOPLE, WOOF WOOF WOOF!!!!!") is the bombproof side of him that just doesn't mind loud noises, being poked and prodded or things falling on his head ("hey, that thing I pulled off the counter almost... oooo chicken on the floor"). So with his favorite treats to ease him in I think he'll take to pulling a cart fairly easily.

Watch this space!
Posted by In Black and White at 11:45 PM