Crikey Moses, the Snowpocalypse is here.

In case you hadn't heard, there's a bit of weather going on in these parts, and the "Blizzard of '11" is in full force. Lake Shore Drive was closed down a couple of hours ago, part of Wrigley Field blew off and landed on Clark Street and even the snowplows are getting stuck. Apparently this is the worst storm in 30 years, due not to the amount of snow that we're expected to get (only 20-22 inches) but the 60 mph winds that's driving it.

Now, I hate ice and I'm not a fan of frigid temperatures, but wind and snow I can get on board with. Bilbo loves the snow and the cold and had a great time on our walk around 5pm. However, I'll admit the storm has stepped it up a little since then. Typically enough he was totally unfazed by the thunder and lightning (though I was seriously impressed!) and did his doggy business in his usually leisurely fashion. He even started to do a bit of a snow prance but then the full power of the wind clearly filtered through to his doggy brain:


At which point he made Billy history with the promptest response to recall EVER and an unprecedented eagerness to get back through the door. Any storm that convinces Bilbo that the couch is better than outside is undoubtedly the storm of a lifetime! 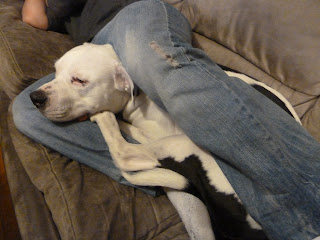 In the meantime, Frankendog is definitely perking up. He's got a new "Comfy Cone" for when he's left alone but is behaving well enough to leave it off when there's someone in the room to keep an eye on him. So he's been happily chewing away at his deer antler from Soggy Paws.
However, his internal clock is still ticking away as normal and when 9pm hits he starts to glare balefully from the crate, wondering why he's not allowed to head to a proper bed at bedtime... 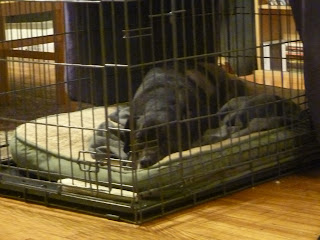