Today was sopping wet, grey and generally dismal. A perfect day for warming up from a rainy walk in the park with some homemade soup and then catching up on DIY projects. However, I had to go to work.

I took Billy for a mini-trek in the morning and we both came back soggy, dirty and chilled. On a mostly white dog you can really see the dirt so I spent quite a while scrubbing him off before heading to the office while he snored on the couch. I ended up leaving work almost an hour later than expected and had dinner plans with dogdad's parents so he swung by and took Bill out so that when I finally got off the train I could just jump straight in the car and we could go eat. When I got home it was raining even harder and I simply wasn't in the mood to get back out there and go for a proper walk. So of course, I procrastinated.

And Billy annoyed me.

In the end I pretty much spent all evening just tossing toys around the apartment and playing tug trying to get him to settle down for a while. We had one quick trip out into the yard (I should add that Bilbo doesn't like the rain so he won't stay out in it if he can help it) and eventually he settled down for the night. So where am I going with this?

Ultimately this evening was a bit of a waste for both of us. Billy didn't particularly want to play games, he wanted to go check out the neighborhood and stretch his legs. And I wanted to read and get some chores done. If I hadn't been so lazy at the outset we could have gone for a half hour walk, Billy would have done this for the rest of the night...

...and I would have had about an hour and a half to myself before bedtime. Instead, we spent two hours getting frustrated at each other (and probably annoying the downstairs neighbors).

That's the thing about dogs, you generally get what you give. Billy's barking and pawing and jumping are all naughty behaviors but it was a very clear-cut case of BAD owner! Another case in point is the scene I came home to earlier in the week. 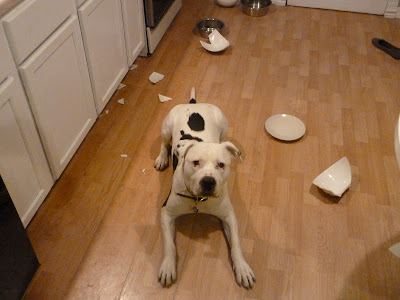 I can't feel even mildly annoyed at him because it is so blatantly my own fault! I'd put some tortilla chips in a bowl and not finished them all, so I popped a cover over them to keep them fresh and left them on the countertop. Running late a little while afterwards I didn't properly Billyproof and forgot that the bowl was within sniffing distance. Of COURSE he pulled it down as soon as I was out the door and wolfed up every last morsel.
I didn't Billy-proof, I haven't managed to train him to leave food alone when I'm not in the house and I haven't managed to crate-train him (he doesn't just complain, he literally breaks out, his crate looks like a bus ran over it). The worst part of this owner-delinquency isn't the demolition of my stuff, but the fact that I'm putting my pup in danger. If I'm not careful he's going to swallow a big chunk of tupperware and we're going to end up in the emergency room.

Safety is the concern in many of the training endeavors that I'm currently not succeeding in - dog reactivity? Well, some dog is going to take him at his word and bite a chunk out of him. Poor recall? one dropped leash, one squirrel and a busy road and squish. Jumping at the door? Which visitor is going to be the first to get a black eye or a loose tooth?

To be fair, in the past month we've at least made some progress everywhere except dog reactivity (that's a discussion for another day). When I got home tonight all four paws stayed on the floor and he immediately headed for his bone so he could do his happy dance. Victory!!!
Posted by In Black and White at 11:07 PM