Bilbo and I took a walk over to Palmer Square the week before my trip. There were off-leash pups chasing after balls, packs of wee yappers on strings (good ole retractable leashes) and a new bouncy large puppy to meet. Yes, there were tantrums, yes I had a rather interesting pattern of bruises on my foot from excitable paws but look where we ended up by the end of the day! 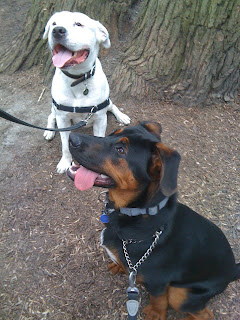 Even if he does offer up some pretty obnoxious behavior initially, it's a huge improvement that we're able to work through it now.
Posted by In Black and White at 7:00 PM 2 comments:

While I knew I'd be displaying just how unruly the pups can be in their door greetings, I couldn't quite resist the temptation of catching our welcome-home on camera. I shot a snippet and then had to put the camera down and start behaving myself instead of adding to all the excitement.

Bilbo's favorite way of catching up is to sit in my lap for cuddles so I ended up on the floor doing double duty petting pooches. 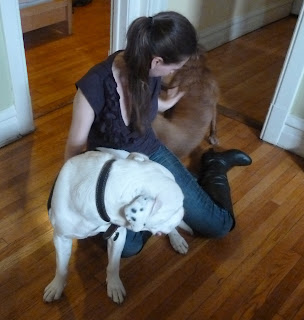 Eventually Bilbo and Buster were tired out enough to just flop down and grin at us, but Clover was insatiable and couldn't stop wriggling in for more attention (apologies for the poor picture quality but a pittie smile that big just has to be shared regardless!) 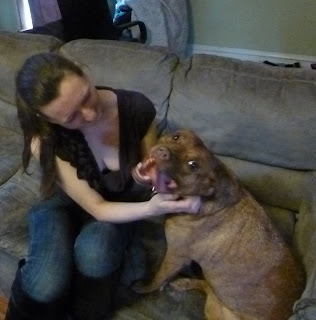 I was happy to see that Bilbo had resisted the temptation to break out of his crate as that's something we've been working on a lot recently. Unfortunately, he shouldn't have been left in there for such a long time yet so it's more good luck than good management that our last two months of gradually desensitizing him to being in there on his own wasn't completely undone.
On the one hand, it was incredibly kind of Dogdad's roommate to agree to look after the pooches for part of our trip (other friends covered for all three pups when he was out of town). It's particularly reassuring to know that they're all together in a familiar place with someone they trust, and options are limited given that Bilbo doesn't really do daycare - that's a story for another day. However, sometimes people like to do things their own way and it appears that you can't quite leave a rulebook when friends are involved and there was a fair bit of variation from the norm going on. While the pooches are in tip-top shape and no doubt enjoyed spending all that time together, I think it will be best to find alternative options in the future.
What works best for everyone else's pooches?
Posted by In Black and White at 8:05 PM 3 comments:

You may remember Bogart, the cute little One Tail guy who went into foster-to-adopt a month ago. I received this promising video from his new dad while I was away.
Now, there's not a whole lot going on in that video but that's the point! Our only concern was whether or not Bogart and his cat, Kobe, would manage to get along. While Kobe obviously still has some opinions to voice about this new addition and there's some pregnant looks being exchanged, it's a huge step to see them both settled on the couch while Bogart makes the all-important decision to pay more attention to his antler than his furry brother!

On a side note, I wish I had a recording of the amazing noises that Kobe comes out with. I've never heard such a vocal cat - his repertoire of squeaks, grumbles and moans is astonishing and had us all in stitches as we went through the paperwork to finalize the adoption.
Posted by In Black and White at 10:00 AM No comments:

After the famine a feast

I'll admit I'm feeling more than a little sheepish that I managed to let a whole month pass without any posts whatsoever. Short version is brand new job, family stuff and a two and a half week long trip to Europe (booked before taking on above-mentioned brand new job). So I have oodles of half-written posts from before my trip and all kinds of pictures and updates which, despite the fact that they're now all out of date I'll probably bore you with anyway!

I've never spent so long away from Bilbo so it was an awful long time to go without a doggy fix. I recognized the signs of serious withdrawal symptoms when I caught myself in the Rijksmuseum in Amsterdam just pointing out the paintings with cute dogs in them to Dogdad.

Amsterdam seemed to be a very dog-friendly city with lots of well-behaved pooches hanging out around the city center. 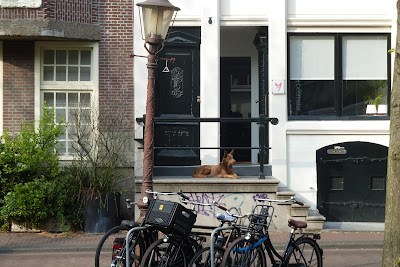 The Netherlands get an extra gold star for having the sense to accept when a law doesn't work. They maintained a breed ban for 15 years but repealed it in 2008 in favor of owner responsibility laws after studies proved BSL to be ineffective. We didn't see many bullies in the capital although I did have to be prevented from throwing myself across the tram-tracks to meet a gorgeous American Bulldog.

While we did a bit of dog spotting in London and Amsterdam, it was while we were up north that I definitely missed the boys. Bilbo would have loved scrambling around the countryside along Hadrian's Wall though it would have been a bit steep for Buster at times. 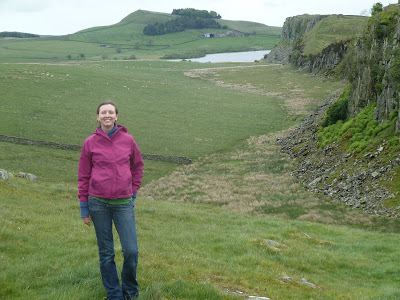 Much as I love Chicago, I'll admit that more than once I toyed with the idea of returning only for as long as it took to throw Billy in a crate and hop on a plane back home. While having a dog in the city has it's own advantages I was incredibly envious of this pack loping around the countryside. 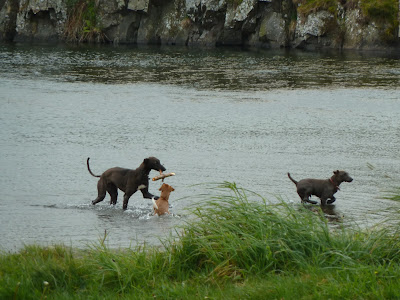 As Northumbria is one of the best kept secrets in the UK and I'd like to keep it that way I'll keep the scenery photos to a minimum but who recognizes this famous tree? 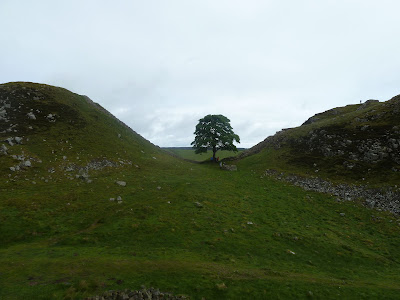 Sycamore Gap is a well-known landmark on Hadrian's Wall (the wall you can see along the ridge was built by the Romans) but Kevin Costner as Robin Hood somehow managed a detour there on his way to Nottingham from Dover. That's the tree he found the little boy hiding in.

Of course, we did have a bit of doggy company on one of our walks, a little closer to home. It takes about 3 minutes to get from my mam's house down to the clifftops so we fit in a few beachside rambles. After meeting up for coffee at Souter Lighthouse with about half the family, we stole Balto for a walk in the sunshine. 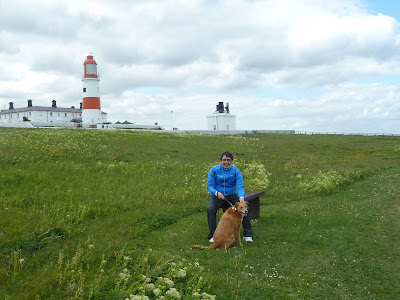 I'd seriously contemplate murder in exchange for a cheese scone fresh from the oven at the lighthouse cafe right now. That could be the jetlag talking. 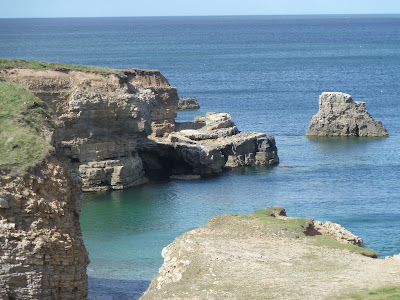 It might look inviting but the North Sea is icy at any time of the year so only a brave few take a dip except on the two truly hot days a year that we get up north. 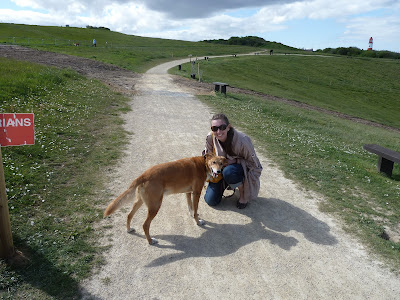 I'm hoping to get back for Christmas this year so I imagine our next clifftop walk is going to be an awful lot colder. 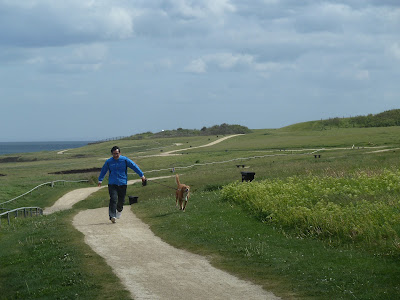