Yesterday I joined a team of One Tail volunteers at an orientation session down at Chicago Animal Care and Control, learning about the dogs in Safe Humane’s Court Case program. 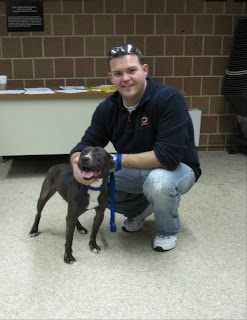 It was my first time at CACC and I definitely came away with mixed feelings about the facility. I was steeled to expect the worst but I’d been well-prepared by my trip to AWL a couple of weeks ago (which was even more depressing, truth be told). On the plus side, CACC came across as well-organized and the large lobby area was quite pleasant and thoughtfully laid out. The walls throughout the center are decked with bright signs sharing fun facts about pets and over the front desk was the quote with which I ended this recent post. The shelter manager, who kindly gave us a tour, seemed well-informed and invested in his job. The current Commissioner of ACC, Cherie Travis, is working hard to turn around her predecessor’s poor record on adoptions and has clearly made it a priority to find homes for pets rather than just euthanizing. (NB. Since it’s been quite a while since a new mayor came in I’m sure many people out there aren’t aware that all commissioners are required to hand in their resignation when there’s a changeover. Let’s keep our fingers crossed that this one is reappointed by whoever succeeds Daley…)
That said, as I walked past people waiting to give up their pets I did find myself wondering whether they were given the same tour of the facilities or allowed to casually hand off their pets in the cheery waiting area. There are between 300 - 500 animals housed there at any given time and I wouldn’t wish it on any creature for as much as 10 minutes. The cages are small, crammed into long barracks without daylight. With so many dogs in a cement-walled room the noise is such that there’s a sign on the outside requiring employees to wear ear protection. The sad howls and frantic barking echo through the corridors and I saw many of my fellow-volunteers wincing at the sound. There are barely enough staff to meet the basic needs of the animals housed at the shelter so the only chance they have to get out of their cage is through volunteers. That however, applies only to the “adoptable” dogs and there are many dogs who, for various reasons, aren’t accessible to regular CACC volunteers. The court case dogs we were working with fall in the latter category because of liability issues. Visit Safe Humane’s website for more information but to summarize: court case dogs have been relinquished (voluntarily or by court order) by people charged with abuse or neglect. They then sit in a cage for months or years at a time while awaiting the conclusion of their owners’ court cases. Previously, the vast majority of these dogs were euthanized but a new program, spearheaded by Safe Humane Chicago, is giving them a second chance.
So, to recap: dogs incarcerated for up to two years, almost all pitbulls/ pit-mixes, forcibly removed from abusive or neglectful situations, barred from interaction with volunteers without a community training partner in attendance because of liability issues. What was our experience with these dogs?

Well, of course, there was a whole lot of lovin' going on! 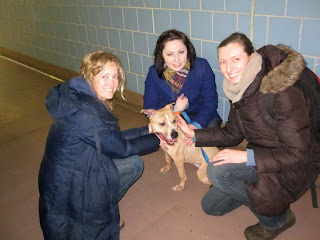 Now, I don't mean to be flippant of course - when interacting with any strange dog, regardless of the circumstances, it's important to be smart, sensible and cautious. All the dogs that we dealt with yesterday had already gone through rigorous temperament testing and there was an experienced trainer on hand at all times to guide us through the afternoon. However, I can't help but poke fun at the media hype that would condemn these dogs out-of-hand as dangerous and unfit to be a family pet. 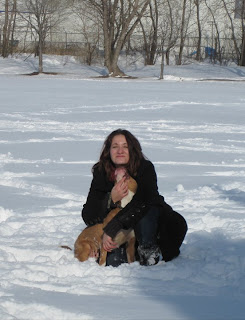 OTAT has already taken four Court Case dogs into their adoption program (Pudge, Dimple, Raisinette & Sandy) and are currently looking for a foster home for a fifth, Olive, one of the dogs we met today: 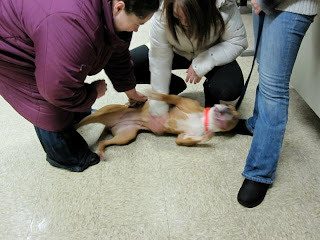 If she's this happy about a tummy rub, just imagine what she'll think when someone offers her a couch to snooze on. And, as I've mentioned before, the best thing about fostering is FREE PUPPY LOVE. She clearly has plenty to share around so I'm hoping that someone emails AnnaOTAT@gmail.com very soon to offer Olive a home.


P.S. the title of the blog refers to the British slang term for doing jail time, “doing porridge”. These wiggly tails are doing the time for crimes they didn't commit...
Posted by In Black and White at 8:17 PM