Gigantaturkey and the three day weekend

This week I actually had a REAL three-day weekend. Generally I have to work on Sundays so even when we get a Monday or Friday off I don't get the full whack, but I had a reprieve this week and got to work tackling various projects.

Friday started with a thrift and craft store tour during which I picked up some fabulous fabrics and a copy of a great book full of sewing patterns. As I'm attempting to give up chainstores in favor of independent or homemade, this is now my go-to for inspiration for all the babies that my friends and family are growing at the moment. I tried out a couple on Friday night and the wonderful Maggie was kind enough to test out the giraffe rattle for me at brunch on Saturday morning! 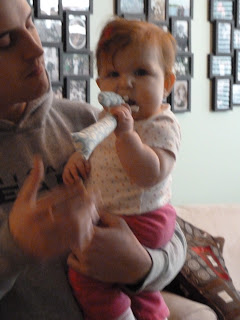 Her fabulous mom cooked up a storm and I need to get the recipes for pretty much everything I stuffed my face with. It's almost unfair that the quiche she made was so delicious given that it was the first time she'd tried one.

That afternoon I finally tackled the sewing chair that's been sat in the corner looking ugly. I got about 1/3 of the way through because I spent almost an hour grappling with 50 year old screws that started to disintegrate as I started to remove them. 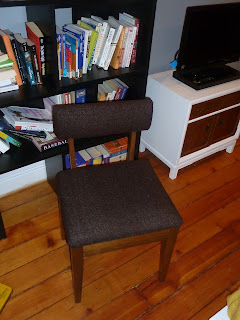 I have a ludicrous nail collection but apparently I'm short on screws so instead of an after photo, here's a midway photo to remind me to actually finish this! 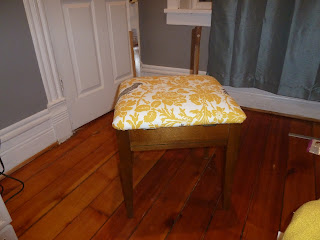 Incidentally, how yummy is that fabric? My partner in craft-crime, B and I discovered a store in my 'hood called The Needle Shop which stocks a fabulous collection of fabrics. LOVE.

Lacking in energy/ time to get to Home Depot for supplies I went out for girly drinks and dinner instead.

Which brings us to the final project of the weekend - the monster turkey!!! I'm not going to get into exactly how I ended up with a 24lb turkey in the freezer. Let's just say there was a little miscommunication between Dogdad and myself. However, it's been defrosting in the fridge all week so I popped to the trusty co-op for ingredients this morning and got to work turning the big beast into food. Seriously, until it's all broken down and staring up at you from the kitchen counter you just don't get how much meat comes off a bird that large. 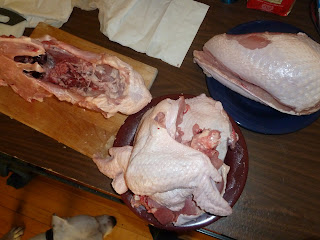 I didn't do too bad of a job jointing it (although you can see that Bilbo tried skulking under the table in case I dropped some). I toyed with the idea of letting the dogs have the raw neck but to be honest, even if I was 100% sure that was ok, we'd just end up with a trail of meat-juice all over the house which would be beyond ick so it got popped into the stock pot instead.
6 hours of cooking later and this is what the freezer looks like: 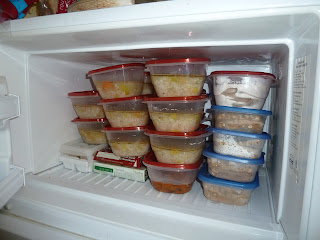 And that's a double row of tupperware in there, not to mention the homemade turkey dog biscuits and two huge tubs of sliced roast turkey (sandwiches anyone?!) in the fridge. Of course, after spending all day cooking the stuff, I'm not sure I want any turkey. Ever again. And did I mention Dogdad is vegetarian?

Of course, I do have willing volunteers to help me out. 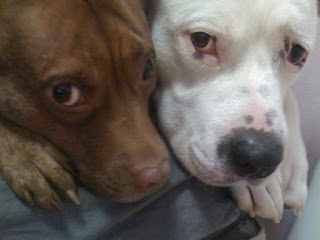 Don't let that sad puppy eyes expression fool you. They got PLENTY of treats today.
Posted by In Black and White at 11:04 PM